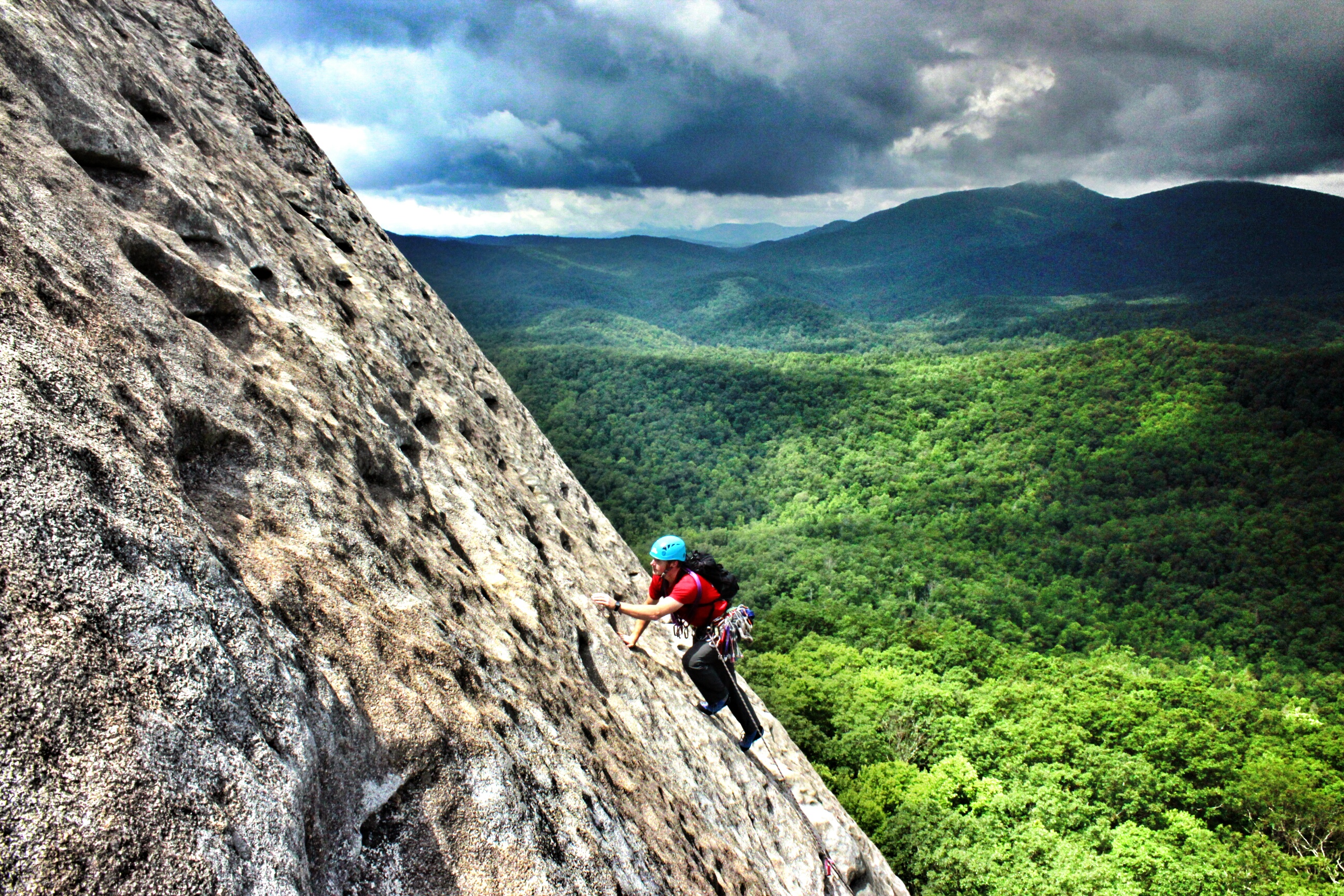 Nestled in the heart of the vast Pisgah National Forest in the southern Appalachian mountains, Looking Glass Rock

When it comes to trad climbing, North Carolina is renowned for its bold, ground up climbs that oftentimes tread a thin line between frightening and fun. While Looking Glass is certainly no exception to the standard, the wide variety of climbing found at the four different areas provide a wide-range of classic climbs of all grades, from 5.5 slabs to 5.13+ testpieces. For beginners at Looking Glass, the numerous horizontal eyebrows that are the signature feature of the towering batholith offer plentiful, but sometimes-tricky placements that lead to some fun, exciting climbing that is certain to provide a good introduction to the area’s unique style of climbing. For climbers in search of splitter cracks and Yosemite-like corners to jam and stem their way up, look no further as there are more than a few of those to be found lurking among the expansive sea of granite as well.

Climbing in Brevard and Transylvania County | Locals Only Project Video

Bouldering and Climbing in Brevard and Transylvania County

Hidden in the shadow of Looking Glass Rock, midst the towering old-growth trees, are the Looking Glass Boulders, a veritable playground for a certain type of rock climbers who seek out short, but difficult, routes.

Boulderers, as they are known, can often be seen treading the narrow trails toward the base of the north side of Looking Glass carrying large, square-shaped backpacks known as crashpads.

Once they reach their destination – just a few hundred feet shy of the base of the towering face of Looking Glass – the climbers unfurl their crashpads onto the ground and begin to climb.

Instead of ropes, harnesses and traditional climbing gear, these climbers rely upon only their crashpads, which are 4-inch thick foam pads designed to cushion falls, and the occassional “spot” from a fellow climber to help direct their fall onto the pad.

The sport is believed to have originated in England in the late 1800’s when a few Brits added nails to the soles of their boots and began challenging each themselves – and each other – with increasingly difficult routes up the rock, which they called problems. The sport grew in popularity in the U.S. in the 1960’s as John Gill, who many consider the father of modern bouldering, pushed the limits of difficulty using a gymnastic-style climbing technique. Gill was also the first to utilize gymnast chalk, which is now widely used by rock climbers to improve their grip.

In the 1990’s the advent of crashpads made the sport much safer and the sport’s popularity exploded. These days, boulderers measure their successes with a grading system known as the V-scale, which ranges from V0 for easy climbs to V15 for the most difficult climbs in the world.

Travis Gray styles a classic highball at the North Side boulders

In recents years, the sport has been quickly growing in popularity among the burgeoning outdoor adventure sports crowd that seek out adventure in the Pisgah National Forest.

Travis Gray, a 21-year-old Brevard College student, escapes to the scenic boulderfield every chance he can.

“What I like the most about the bouldering out at Looking Glass is just how serene it is and how quiet it is,” he said. “You can be out there by yourself and not hear a soul. I think it is good for people to have that type of place – somewhere to escape to.”

Gray said the natural scenery of the area is hard to describe with words.

“It’s just majestic,” he said of the forest. “It’s in the shadow of the North Side that just towers above you when you are out there.”

Gray, who has been climbing since he was 12 years old, said he really enjoys the aspect of perseverance that climbing requires in order to be successful. Gray, who frequently participates in indoor climbing competitions, said that learning to push himself to improve is somethiing that he has learned to love.

“I really like having to try so hard over and over before achieving that successful outcome,” he said of the process of completing a difficult climb. “It’s one of the most incredible feelings ever.”

Gray has repeated many of the most difficult problems at Looking Glass, many of which were put up by local climbing coach and boulderer Dan Horne. Gray said that being able to repeat the difficult routes that others have done before him gives him inspiration and a desire to keep pushing himself to get stronger.

Gray said he also really enjoys the camraderie of the climbing scene.

“I like being out with friends and hanging out and watching them climb strong,” he said. “It’s just a great environment.”

For Phil Hoffmann,vice president of the Carolina Climbers Coalition, the sport offers him an opportunity to get away from the hustle and bustle of his daily routine and get a great workout, all while enjoying the company of his friends.

Elizabeth Jackson climbing high above a large stack of pads and friendly locals.

Elizabeth Jackson getting into the zone high off the deck.

But one of the most appealing aspects of the sport for Hoffmann is being able to get out into the woods and enjoy the natural environment.

“The fact that it is located right in the heart of the Pisgah Ranger District is one of the most appealing things about the area,” he said. “It’s a boulderfield that has somewhat of a backcountry element to it. It’s nestled into the heart of the eastern hardwood forest, which is just one of the most beautiful places that I can imagine in the world.”

Hoffmann said that the lush forest creates an environment that often makes the boulders appear to have never been climbed. But don’t let the moss fool you, he said. These boulders have been climbed on for years.

“A lot of the guys who were putting up routes in the ‘70’s and ‘80’s on Looking Glass have done many of those boulder problems before,” he said. “These boulders have way more history than you think.”

Hoffmann said that Jeep Gaskins, who was responsible for many routes on Looking Glass, used to climb extensively on the boulders in the area when they weren’t on the wall.

“He and his buddies used to go up and camp out at a big flat tabletop boulder near the Hidden Wall,” he said. “They would spend a weekend just camping out, doing a bouldering circuit in the woods around that area. It just goes to show that, like the route climbing at Looking Glass has such a colorful history, the boulderfield does too.”

Hoffmann said that as the sport grows in popularity, climbers have begun discovering more pockets of boulders hidden in the forests. He said he expects that in the future the north side will be only one of many spots that local bouldering afficianados will be able to choose from.

“People are starting to branch out and look for other bouldering in Pisgah,” he said. Among the areas that are seeing a recent resurgence in visitors are the John’s Rock boulders, boulders along the Looking Glass summit trail and other scattered areas.

“People have been bouldering near the north face of Looking Glass for many years now, but recently people have been rediscovering just how good it is out there. It may not be the biggest boulder field in the state, but it definitely has some very high-quality problems on perfect stone,” Hoffmann said. “The main thing that draws climbers here is the quality of rock and the unparalleled wilderness setting. You just can’t beat it.”